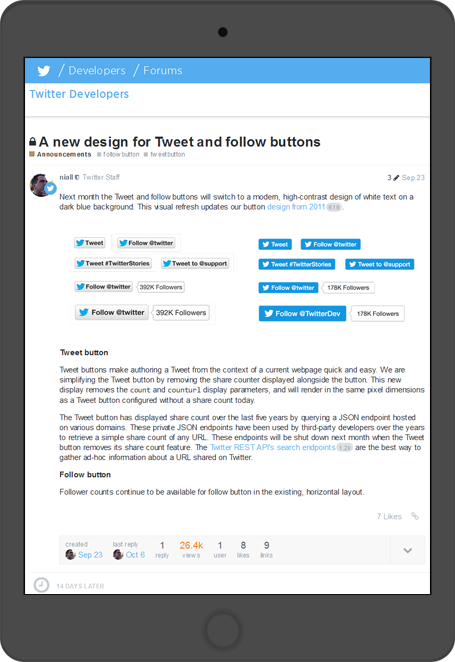 In a blog post Twitter suggests that people who still want to know the number of shares for their articles should use the Twitter’s REST API to obtain the share counts by counting the results. For many users this is not feasible because of the technical complexity involved.

OpenShareCount aims to make this process a little simpler by providing a drop-in replacement for the old, undocumented and unofficial API endpoint that all the existing official and non-official share buttons were using. For people using Twitter's default button, OpenShareCount provides a bubble with a counter to place next to it.

The OpenShareCount project was built by Lead Stories LLC and is not affiliated, endorsed or in any other way connected with Twitter.

Twitter suggests to use their REST API instead. If you do a search for a URL using Twitter’s REST API, you could theoretically count the results and use that number.

These search results only go back a few days so over time the count would become inaccurate. Additionally tweets from private accounts do not show up.

Using the REST API requires a fair bit of programming and involves authentication. Not very easy for the average user. Still, better than nothing.

OpenShareCount can periodically do the search for you and it will keep track of the number of old search results so the count stays up-to-date over time.

The Twitter API limits the number of searches that can be done in a set time period on behalf of individual users.

Once you are signed up we will provide you the share count data in exactly the same format as the old Twitter endpoint.

This should allow you to make the count on any third-party Twitter button work again.

Twitter's own buttons no longer show a count so we also provide a bubble with a counter that can be placed next to it.

To use OpenShareCount, first sign up or it will not work:

Copy the code and paste it into the source of your website, right after the code for the existing Twitter button and don't forget to sign up first or it won't work.

Advanced usage: Put in data-url="http://link_goes_here" if you want to show the count for a particular link instead of for the current page. Change the value for data-dir to 'right', 'top' or 'bottom' to make the bubble point in a different direction, and/or add data-width="..." or data-height="..." to change the width or height of the bubble.

IMPORTANT: if you leave the 'jsonp' or the '&callback=?' parts in, we reserve the right to block requests for your domain until you make changes. Such requests can't be cached and they slow things down for us and for your users.

Important notes: it can take some time for search results to come in, so initially the count that is reported will be zero on all links. Contact us if after one hour it is still zero. Due to limitations on the Search API initially only tweets from the past week or so will be counted. Tweets going forward will be counted and added to the total. Tweets from private accounts will not be counted. Results will only be returned for links in the domain you signed up with. If you need results from multiple domains, sign up with multiple Twitter accounts.

OpenShareCount is offered as-is. Use at your own risk. Usage is free, we will notify you if this ever changes. We will not sell, transmit or give your personal information to third parties without your consent.

OpenShareCount is not owned, associated or partnered with Twitter.